I've been home for just over a month now and feel I've had a good chance to reflect on my first Cycling for Libraries tour. Certainly there were some memorable experiences to be had along the way; meeting the World's only Airport librarian, for instance or sampling some of the more unusual Beligan brews (cherry beer, anyone?!) in the many, many library bars! I also got the sense of being part of an something which (although already in its 3rd year) is set to grow even bigger and more ambitious with time. Many participants (a fair few of whom were not library workers themselves) talked about how they felt the trip spurred them to want to step in and help support libraries internationally or to contribute more to the profession. Although pretty exhausted by the end of it all, it was inspiring to see that many others are also prepared to get out there and really do something fantastic in the name of library advocacy too!

The tour also made me think about some key issues within librarianship and about how these are addressed differently in different countries. These are the main points I took away from the experience:


﻿
﻿
This is something which I'd admit to not having given enough thought to previously. Perhaps because I work in the academic sector, I tend to think of public libraries as places offering free access to information to all. This is not always the case, with subscription fees (albeit affordable charges, in the region of €10 to €20/year for basic membership) being levied on adults for borrowing rights. This was a major point of contention in discussions with Dutch MPs at the Hague, with many library advocates in the Cycling for Libraries group stressing how subscription charges would be unthinkable in countries like the UK or US. Over and above these subscription charges, however, are charges for use of internet access or multimedia resources - and almost all countries have public libraries which charge for these. Are these charges ideologically different from a borrowing charge?..or from charging fines, for that matter (which some would argue amounts to the same thing)?

This certainly gave me a lot to think about. That's even before you get into the great ebook debate and the fact Holland is also the first country to take publishers to court over not being able to lend ebooks from their public libraries. And good on them too!

Branding seems to be such a pervasive issue in libraries at the moment. Efforts by the Chartered Institute of Library & Information Professionals (CILIP) to rebrand themselves here in UK have made national news, having snowballed into a fierce debate which just rumbles on and on. Quite enough about that already, though.. As you'll be able to see from the list of libraries in my previous post, in many cases in Holland & Belgium, central libraries are now OBA libraries, characterised by their 'living room in the city' appearance with their bright, clean, open spaces. To some extent, walking into these libraries felt like entering an Apple Store or an IKEA but canny designers have added features to give these spaces character of their own. In the brand new Affligem Library, for instance, spaces within the library have been assigned the names of rooms in a house. The story-telling area is enchantingly designated as the 'Attic' for example. For me, at least, these are the kind of ideas which prevent the new breed of libraries from becoming faceless, homogenous buildings and transforming them into something truly out of the ordinary and exciting.

There are some great things being done with Open Data and we were lucky enough to hear about some of these along the route. In DOK Delft, DOK Lab technicians have made use of library members' address data to send heritage images and information about their own streets direct to their email. Better yet, inside the library there are multi-touch surface installations give users the chance to delve deeper into archives which are relevant specifically to them.

In a refurbished skate park at DOK Ghent, Pat Hochstenback (Digital Architect at Ghent University Library) told us how open data can be used in even more imaginative ways. He used real-time information about which self-service machines were being used on which level of the library in his code, converting book issues (or circulations) into musical notes, thereby answering the question, "What does a library sound like?":

#cyc4lib: What does a library sound like? from Patrick Hochstenbach

Whilst the cynic in me noted that some of the things we saw were of questionable use-value (..excepting Pat's example above, obviously!) it is clear that Open Data presents many opportunities for libraries and has the potential to revolutionise users' experiences. Another example we were given in Ghent, for instance, was an award-winning app which lets student's know which is their nearest open pharmacy - illustrating how Open Data mining could even be a potential lifesaver.

4) Libraries should be where people are


There is a real effort in Holland to locate libraries in the busiest spaces. Haarlem Station Library was an example of this which we visited. This was set up to allow people who are waiting for trains during peak hours to have an opportunity to discover books, flick through a magazine or to browse the internet. Any local users with a library card can use the service. It is closely linked to the Schiphol Airport library and similarly has close links with Dutch tourism.

The intention is to open libraries in central stations across Holland, allowing users to borrow a book at one station for their journey and then drop this off at another. This reminded me of the beginnings of WHSmith in the UK, which started as a (subscription-based) book-lending service. Its outlets were located at stations to allow travellers to enjoy the newly available innovation of the paperback book during their train ride. 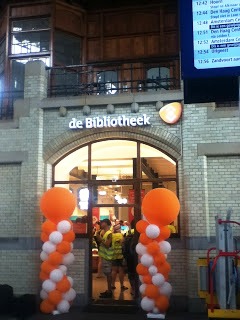 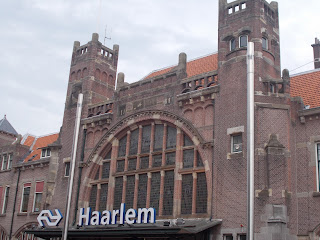 Goes without saying really.. but if ever there was a tour which defied librarian stereotypes and preconceptions then this would be it. As you can see from the participants' profiles, we're an eclectic (/eccentric!) bunch. Everyone seemed to have very different interests, backgrounds and reasons for wanting to take part.

Showing solidarity with libraries which find themselves under threat was an important part of the tour too; no less so than on the very first day, with a visit to the Royal Tropical Institute in Amsterdam. Here we lent our support to staff of Koninklijk Instituut voor de Tropen's (KIT) library whose resource was set to be closed down. Hearing the shocking news that the majority of the 900,000 items comprising this collection were "to be shredded" brought home some of the stark realities which libraries face right now. Whilst we and others tried our best to spread the word about this library (a petition against its closure amassed some 40,000 sigantures) KIT Bibliothek did sadly close, just today in fact - 1st August 2013. On a slightly more positive note, the Institute's website at least states "KIT will make every effort to keep our unique library collection in the future publicly accessible, albeit in a different location". This is of little consolation, however, particularly to those who worked at KIT.
﻿﻿
﻿
﻿

There was also a real spirit of camaraderie throughout the tour as well and everyone we met along the way also went out of their way to make us feel really welcome. This was really appreciated as Cycling for Libraries could definitely be something of an endurance test at times. I don't just mean in terms of the cycling itself here - there was just so much involved.. One minute you find yourself being pelted by hailstones as you fight your way through ferocious crosswinds along dunes on the Dutch coast, the next you're trying to take in a presentation on library architecture or libraries in developing countries..or discussing the future of libraries with MEPs. Suddenly you find it's over a month later and you are trying to make sense of it all!

Those talented folk Ghent University (UGent) even made this lovely tribute to our ride:

Cycling is a lot like working in a library...

The highlights weren't necessarily the landmarks we saw along the way but some of the  things that happened on route: Returning from lunch at the Hague to discover that Bibliotheek van Haag staff had gone to the trouble of putting saddle covers on all of our bikes to protect them from the rain, for instance.. or the clouds finally parting just as we crossed the Belgian border after some truly horrendous weather.. or random conversations about, say, the actual science behind why we don't have hoverboards (yet!) or how you can take your bike on a van through the Chunnel (I had no idea this service existed!). These are just some of things off the top of my head which have stuck with me for various reasons!

OK, so it was also not all plain sailing along the way, with a fair few scrapes and close shaves (particularly thinking of a very determined motorcyclist on a narrow street in Brussels here who almost ploughed the lot of us down .. grrrr!!). There was a fair amount of taking 'scenic' detours (although we definitely "weren't lost" apparently) and we made do with some pretty 'characterful' accommodation at times too..

..but we made it in one piece and I suspect most of us are probably daft enough to want to do it all again next year. Hope to see you all in Barcelona in August 2014!