In April of this year I enjoyed a whistle-stop tour of Poland, starting in Poznań - Poland's 5th largest city, made famous by its football club's unique goal celebrations and the mechanical goats which sit atop it's town hall clock tower. The goats emerge just once per day (at midday) to the sound of a live bugle horn!: 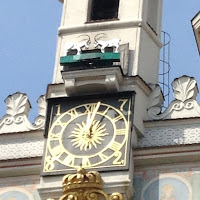 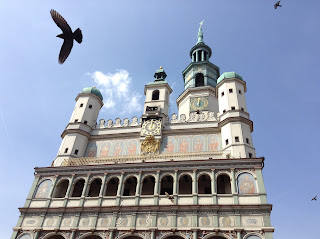 Taking in Poznań's impressive Biblioteka Uniwersytecka at Adam Mickiewicz University initially felt a little bit like stepping back in time, with card catalogues and microfiche readers aplenty. The library is actually a lot more forward-looking that it first appears, with major efforts taking place during the last five years to migrate the University's catalogue holdings online and to ensure readers are available to access online content (via ProQuest's Summon). 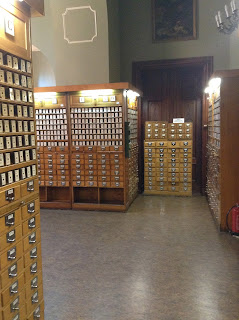 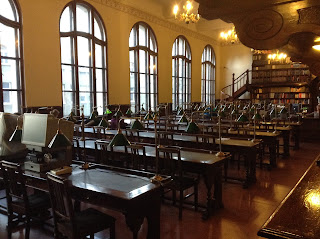 Just around the corner from this building is the Polish and Classical Philology Faculty Library which opened in 2009. Designed by Polish architects Neostudio Architekci,the building is half sandstone and half glass in order to prevent the modern development from looking too incongruous with the historical structures surrounding it on all sides: 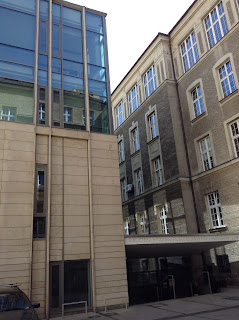 Next it was off to Gdańsk on Poland's north coast and the Library of the Polish Academy  of Sciences. This library, which doubles up as an educational, information and cultural centre for the whole region, includes some quirky touches, not least the 'engines' jutting out of the front of the building: 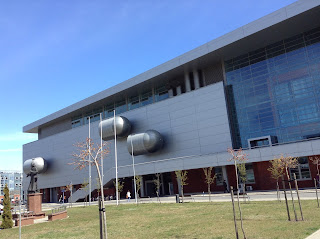 Venturing inside, it turned out these turbine-looking things double-up as bookable seminar/group study rooms! The library also features a replica of John James Audubon's super-oversize (3ft x 2ft!) tome Birds of America which sits in public display. Some other unusual features include cacti at the helpdesks and a cafe bar built out of reused books: 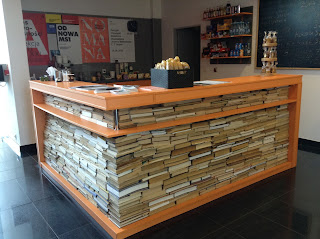 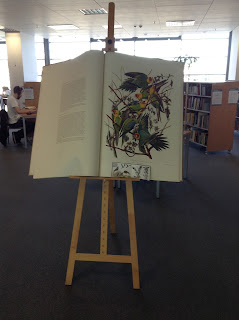 After that it was on to Warsaw, hme to the spectacular University of Warsaw Library which was officially opened in 1999 by one Pope John Paul II. The ceremonial chair which was used during the consecration of this grandiose edifice still sits in the library to this day. It greets visitors as they come in through the building's imposing entranceway, towered over by pillars topped with statues of eminent Polish philosophers from Lvov-Warsaw School of Philosophy: 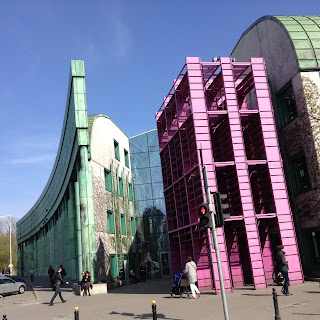 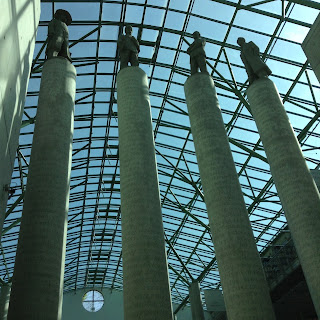 Biblioteka Uniwersyteckaalso w Warszawie also boasts one of the largest roof gardens in Europe at over 10,000m², including a fish pond and "cosmological" sculptures! It was great to be able to stand on top of the library and get a fantastic view of both the city of Warsaw itself and the Vistula River (or Wisla, in Polish): 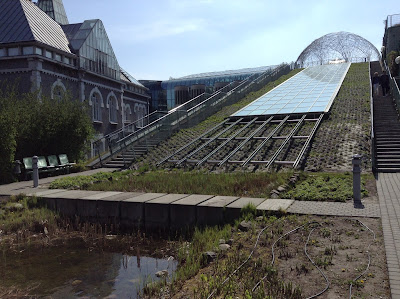 I also just about had time to stop off at the National Library of Poland's main site in Warsaw's city centre where I was particularly impressed with the music collection which includes a display of some of Frederick Chopin's earliest scores as well as this reading room with its ornate mahogany baby grand piano: 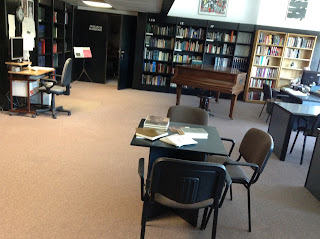 The National Library (Biblioteka Narodowa) houses the majority of its special materials in its "country residence" of Krasiński Palace. It is important to remember that some 16 million volumes of Polish literature were destroyed by the Nazis between 1939-1945 in an effort to effectively wipe out Poland's rich culture and history. The National Library's collections were heavily affected by the war, as was the centre of Warsaw itself, 85% of which was destroyed. The University of Warsaw Library lost all but 262 of some 7,000 texts contained within its manuscript section during World War II. Seeing both of these libraries' collections as they are today, as well as visiting the painstakingly-restored Old Market Town was a reminder of the strength of human resiliance which was in evidence in Poland after the Second World War, to an extent perhaps unparalled anywhere or at any time in world history. 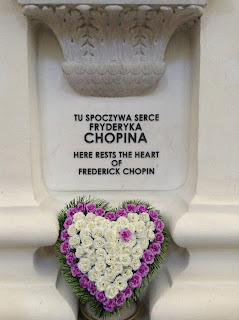 Warsaw is also home to Frédéric Chopin's embaulmed heart.
The rest of his remains lie in Père Lachaise Cemetery, Paris.
Posted by Phil at 08:35 1 comment: