I popped into the magnificent Weston Library, Oxford this afternoon and this has inspired me to do a bit of an update on my year so far. The library, which is a reincarnation of the former New Bodleain Library (and is therefore also the new New Bodleain Library, I guess...) officially opened earlier this month and is looking fantastic! 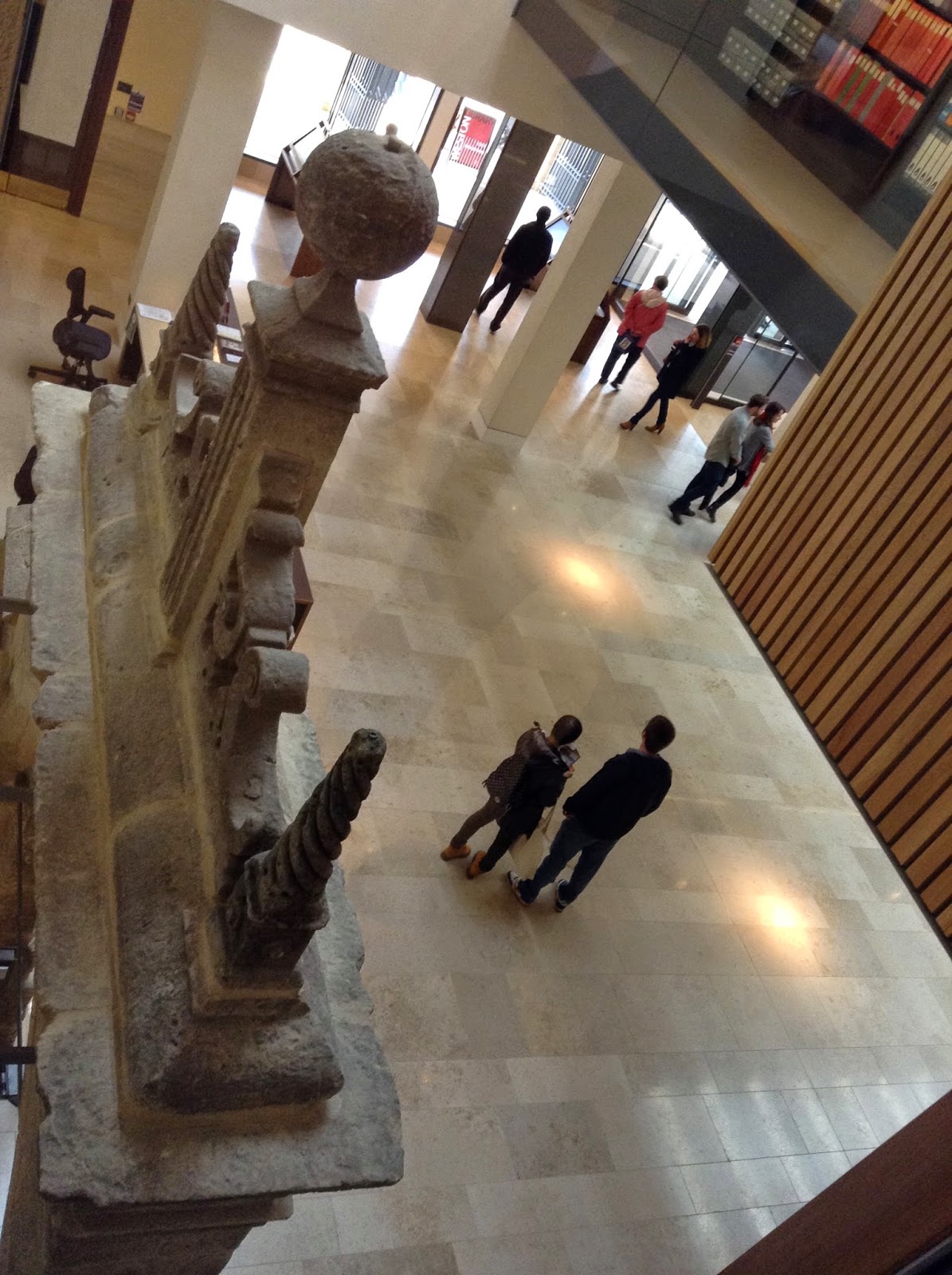 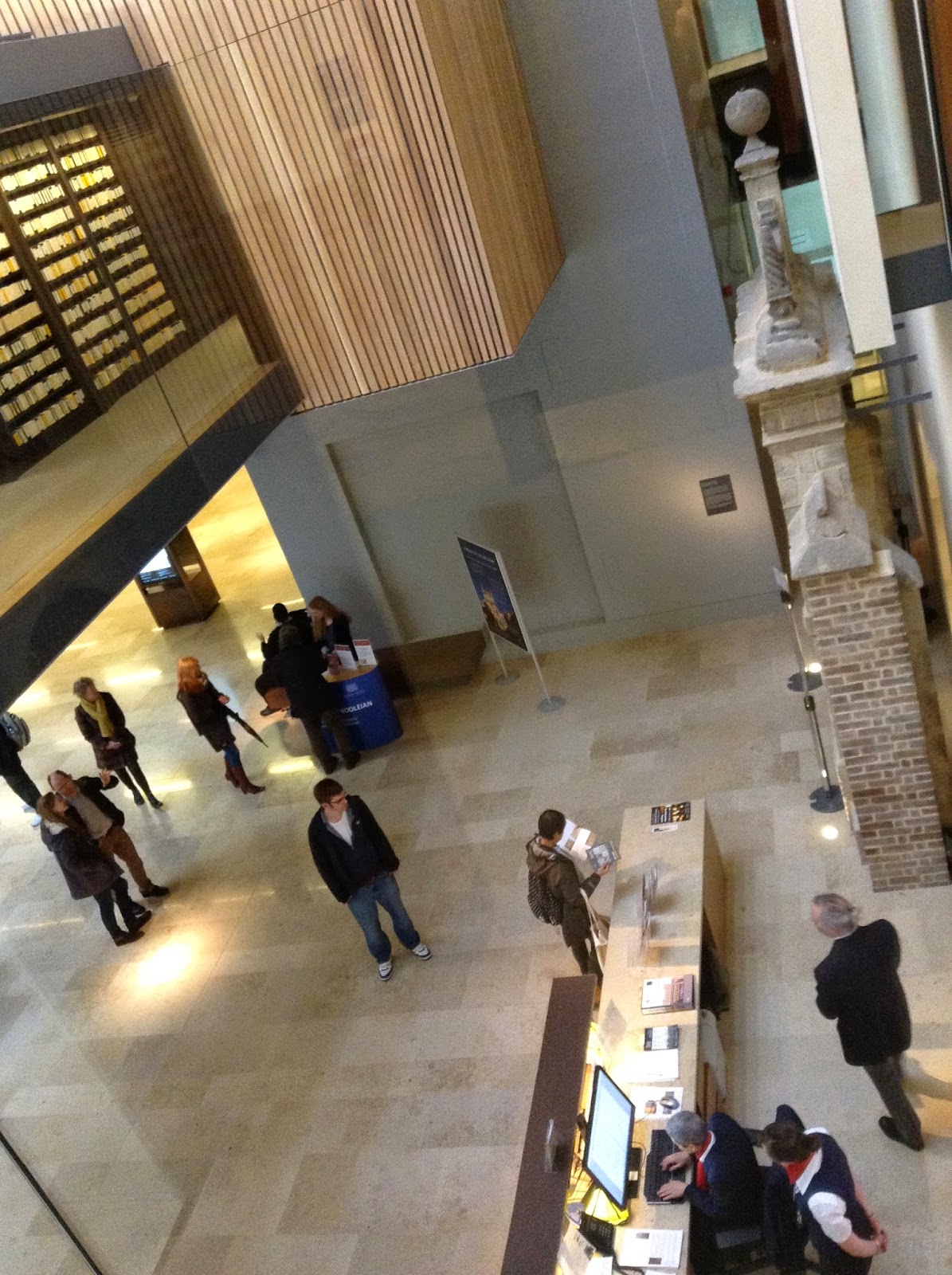 I was over at Cambridge not long ago too - just last month, in fact - where I attended an Academic and Research Libraries Group (ARLG) East event on 'Moving into Management' held in the equally salubrious surrounds of Christ’s College (…albeit in the Amenity room of the insalubriously-named ‘Z’ building – but undisputedly Christ's College, nonetheless!).

This session was in two parts. In the first, Professor Barbara Allan spoke about her varied career path, beginning as a Serials Editor in an academic library (where she was physically working in a cage!) and working up to her current role as PVC and Dean of Westminster Business School.

Barbara cited evocative experiences of being managed, ranging from “scorpion”-type bosses who left her walking on eggshells to those who conveyed what she describes as “authentic leadership” – a style of management consistent with the manager’s own personality & core values. She went on to tell some colourful anecdotes of her own experience as manager, often under difficult circumstances.

Barbara broke the session into small groups to discuss different management styles. These were classified as:

We were also encouraged to discuss our own experiences of being managed - both good and bad! Effective leadership was determined to be a vital quality for anyone in a management role.

Barbara talked about a number of ways staff can position themselves to become leaders. These include:
A questions and answers session followed where the impact of mentoring was stressed again. Barbara talked about “near” or “far” role models (those in or outside of your organisation). These could be formal mentors, as in the context of CILIP's Chartership scheme, but do not have to be.

The key tips which I took away from Barbara’s talk were:
In part 2 of the workshop, three managers who had relatively recently taken up their jobs were invited by ARLG to speak about how they had moved into their (very different) roles and to pass on any management tips they had.

Andrew previously worked for the British Library so noted the contrast between this and working with only 1 other (part-time) member of staff in his unique role (...which is based in Cambridge, he emphasised, as opposed to more glacial territories!)

He described the big advantage of being in such a small setup in terms of allowing him to generalise (he co-writes a blog, in fact, called Generalising).

For Andrew, management can be broken down into 4 categories and getting experience in each of these areas is key when looking to moving into a management role:
Claire Sewell – Cambridge University Library (@ces43)
(Senior Cataloguer currently working in an operations management role)

Claire emphasised the importance of not putting yourself under too much pressure, particularly when changing to a different team or subject area as there is always a lot to learn. She mentioned she had the benefit of working with a manager who was really supportive. Claire was also able to attend an Institute of Leadership & Management Course which she found very useful. She stressed that confidence will come with experience and advised not to get daunted in the meantime.

Mentoring and shadowing were cited as good experience for getting into management, as well as volunteering opportunities.

Claire echoed what Barbara said in the first part about leadership, reiterating that you have to follow a manager but you will want to follow a good leader.

Hélène works for the Modern and Mediaeval Languages Library at Cambridge as the Deputy Librarian. For her, leading by example and developing others' skills is key. She noted the difference between delegating and dumping work on people, stating that it is important to delegate where it will help to develop staff under your charge.

Hélène echoed some of the things which had been said earlier about mentorship (formal & informal). She also gave interesting tips on encouragement, citing a study which showed that it takes four times as much positive feedback to 'cancel out' negative feedback in the mind of the person receiving it.

Dealing with conflict is something Hélène views as an inevitable part of a management role. It is vital to empathise, to be consistent in one's approach and to try to see things from the other person's perspective, she stressed.


The main points I took from the day were:
Slides from the event are available here: http://www.slideshare.net/ARLGEastern


My main excursion so far this year was a trip to Prague - another city which boasts some amazing architecture... I mean look at this, for example, from Frank Gehry!:


Prague is home to the famous Strahov Library which sits inside a monastery to the West of the city. There are two main rooms: the Theological Hall (left) and the Philosophical Hall (right): 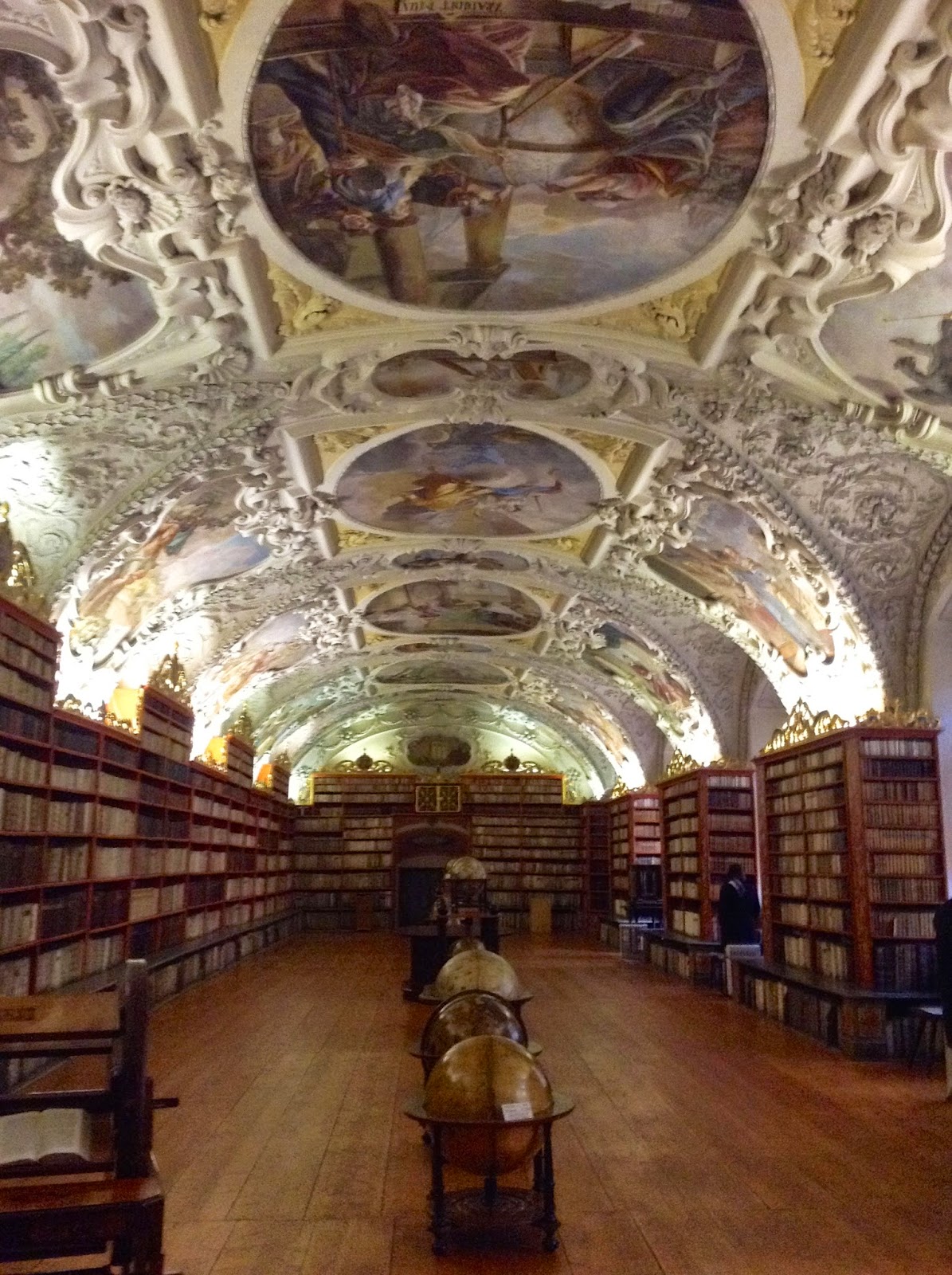 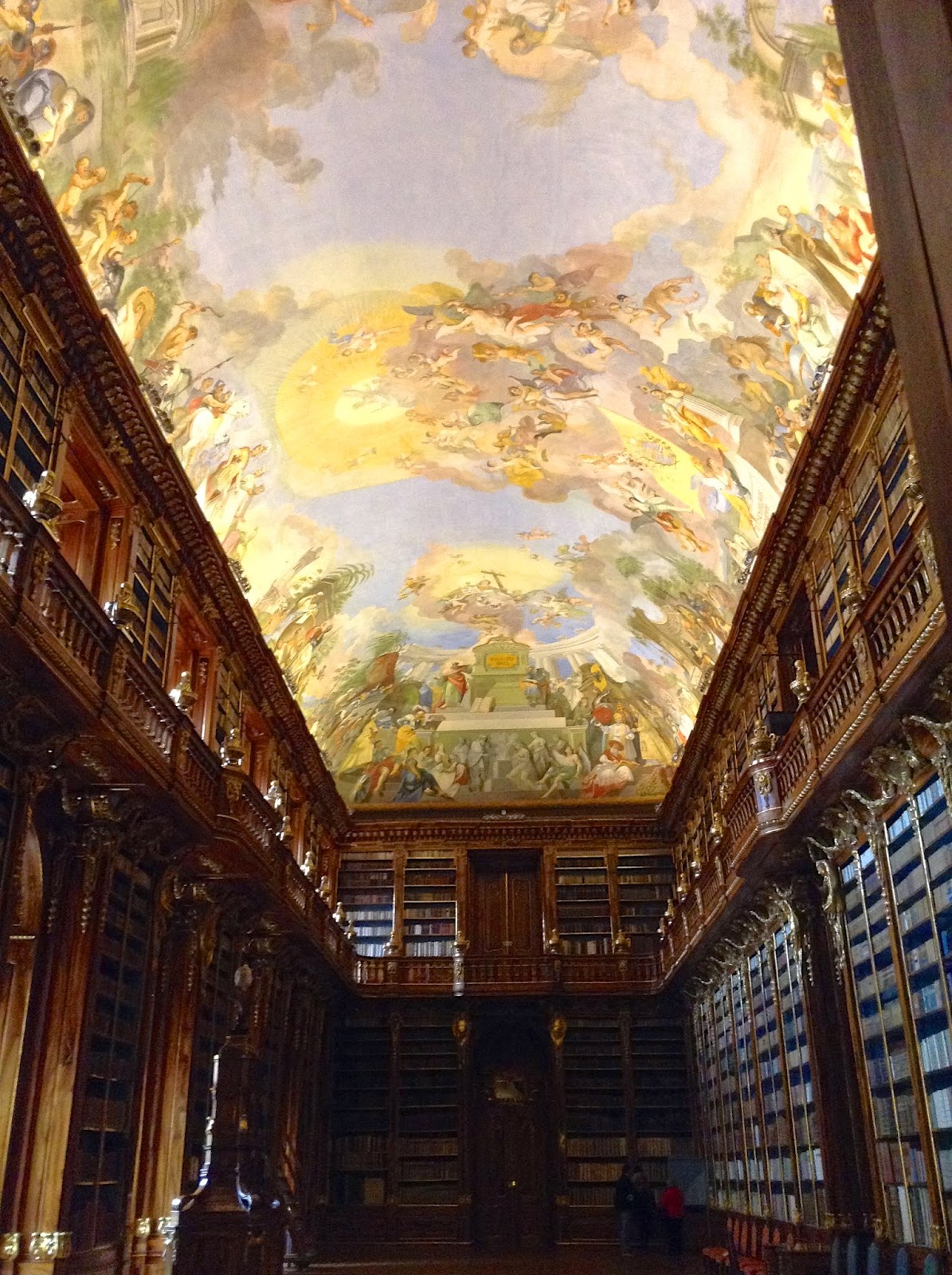 The Theological Hall dates back to 1672 and was restored in mid-1990. It includes around half-a-dozen 17th Century geographical globes, along with around 20,000 volumes and a bookwheel (just about visible in the bottom left hand corner in the photo above!) on which to read them.

The Philisophical Hall meanwhile was built around a century later (the room's facade was finished in 1783). It soon became famous in European culture, with visitors including Marie Louis, Archduchess of Austria and wife of Napolean Bonaparte. Books in the top gallery can only be accessed via secret staircases which are hidden in the corners, masked by false book spines (...I know, cool huh?!)

The library is deservedly a staple of many a most beautiful libraries list, so it felt like a real pilgrimage to finally see it in person!


The other piece of news to report since last time around is that I am now officially Chartered! I'm really thrilled to bits to have completed the MCLIP after having worked my socks off for some four years (well...on & off!) to get it done and dusted. I am also very grateful to my mentor Tom who gave me a lot of support and encouragement along the way.