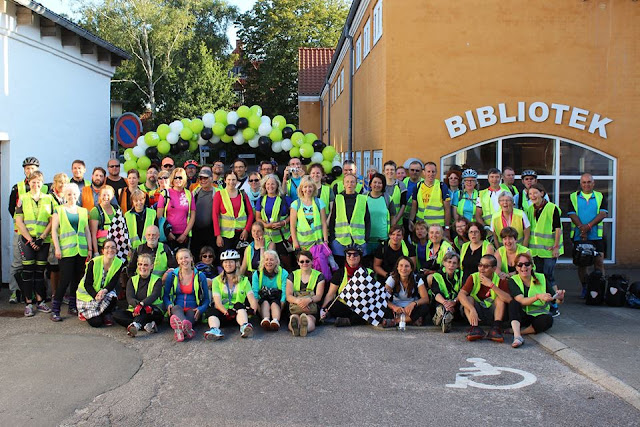 Cycling for Libraries participants arriving at Aalestrup Library (where we slept over!)

Earlier this month I took part in my 3rd Cycling for Libraries tour. Billed as the "New Nordic Tour", this was definitely the toughest itinerary to date, taking us (a group of over 80 librarians, information professionals and "library lovers" representing over 20 nationalities) some 700+ kilometres across Norway, Sweden and Denmark in 10 hectic days, with plenty of rain, hills and other assorted hardships along the way!

At certain times...say when you find yourself sleeping in a gym hall surrounded by 40 other people...or creating a human roadblock at night on one of Gothenburg's busiest roads...or playing table-tennis at breaktime during an onboard library workshop whilst crossing from Sweden to Denmark on the ferry, it hits home that Cycling for Libraries is definitely not your ordinary library conference!! But it's an unforgettable experience and one which I would recommend to anyone in libraries (...or at least anyone not averse to a fair bit of physical exertion, I should point out - just as something of a disclaimer!).

It was such an ambitious tour this year that there is no way I'll be able to go through & describe each of the 25+ libraries we visited and all that we did. Some of the themes which pervaded this year's tour though were:

Each library we visited in Norway included a stage and a platform with audiovisual equipment for speakers to use. This provides a soapbox for campaigners, local politicians and other activists to voice their views and host debates. This is part of a national initiative to encourage discussion in libraries which is now engrained in the Norwegian Library Act (revised January 2014). 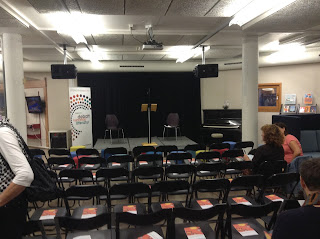 At Moss Library, which we visited on the very first day, it was explained to us that libraries of yesteryear are, in effect, "groceries" for selecting information products. These have now been transformed into "chef's kitchens" of collaborative knowledge creation. I rather liked this analogy and this was a transformation we saw replicated throughout Scandinavian libraries.

Våga klicka or "Dare to Click" is a large scale project to get some 500,000 digitally disenfranchised Swedish citizens online. One example which we heard about in Uddevalla is 103 year-old Dagny, who learnt her web skills by visiting the library's classes and now authors her own blog - http://www.123minsida.se/Bojan/. It has been incredibly successful, attracting nearly 1,000,000 page views to date! She uses to try and encourage others to join the "blogging party" as she describes it!: 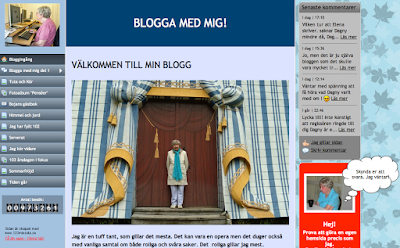 To note that unlike the UK, for example, there is no obligation to provide a library service in Sweden. The idea of a "People's House" where citizens can acquire these sorts of skills is simply engrained in Swedish culture and democracy.

One of the optional visits in Gothenburg was to Chalmers University of Technology Library where I found a keen emphasis is placed upon space for staff. Yes - it is obviously vital to still prioritise space for users BUT providing areas where staff can thrive too is also important. At Chalmers up to 5 project rooms can be used at once. Each is equipped with the latest technology and ideas are littered all over giant whiteboards across the walls. In this revolutionary setup, projects are decided upon by staff members at all levels and then it is up to management to enable these projects to happen! Examples include a MOOC designed by library staff & a library management system created in-house. Everything the team does online is also made available as open source content. 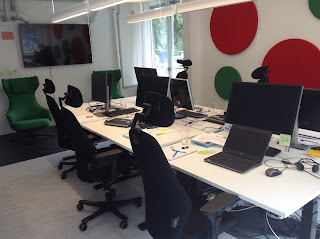 We later saw this being replicated at other academic libraries in Sweden & Denmark, for instance Aalborg University where staff generally work on projects for around 2 1/2 months at a time, rather than being in specific team structures. Aars Library in Denmark describes itself as a "spaghetti library" owing to its non-hierarchical structure.

This tour also highlighted the importance of users being given the opportunity to provide instant and direct feedback. At several libraries, a "hack the library"-style initiative had been tried, with users given ways to show what they liked or disliked about their libraries, then make the changes they wanted to see themselves! Examples include a system of green & red dots used in Vesthimmerlands libraries which the public could disperse around the buildings to highlight the good and bad points of their libraries. Users being given the freedom to reconfigure furniture in most of the libraries we saw is another example of how people are being made to feel engaged with their library services in Scandinavia. 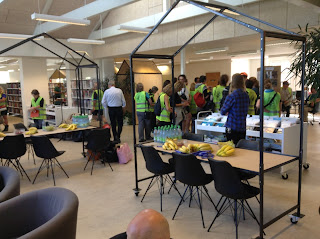 5. The Danish Model of Library Design

Denmark does library design well. Astoundingly well, in fact!! I just updated my top ten list of recent library visits and found that no less than 4 of these are Danish libraries! One of the things Denmark has done so well has been to implement the "four space model" in the majority of its libraries.

The four spaces are inspiration space, learning space, meeting space and performative space. It is a model which is an enduring one to the extent that it has informed the design of libraries far and wide in the 21st Century - examples inspired by the model include some of those I've blogged about previously, for instance Malmö City Library, OBA Amsterdam and the Library of Birmingham.

Danish libraries are also as accessible as possible, with the Open Library system meaning over one-third of the country's libraries can be accessed any time of the day and most of the night via a user's ID card when staff are not there.


I'm actually now feeling kind of knackered just thinking about all we managed to cram into the wild, sometimes frenetic journey that was Cyc4lib 2015 but in part 2 of this blog post I will try to describe some of the amazing libraries we saw along the way!... 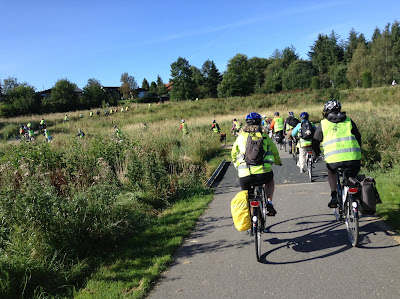 Vesthimmerlands Biblioteker (2015) TAK FOR BESØGET! (Translation: THANKS FOR THE VISIT!) [Facebook] 9 September. Online at: https://www.facebook.com/VHBIB/timeline [Accessed 26.09.15]
Posted by Phil at 03:35